Stewie dumps Rupert when he learns he used to belong to Chris. He tries to get revenge by getting a new teddy bear and then a toy giraffe, but neither helps him feel better. After taking a spiritual journey, Stewie concludes he must kill Chris and Rupert. Stewie lures Chris to a lake house he rented and knocks him out. He fights Chris in the rowboat while discussing The Talented Mr. Ripley and that it is not an Alfred Hitchcock film. Stewie knocks Chris out and into the water. Using the nanny cam he put in Rupert earlier to keep an eye on him and Chris, Stewie learns Chris was going to give him back. After a few unsuccessful tries, Stewie manages to save Chris. As the latter recovers in the hospital, they agree to never reveal what happened. 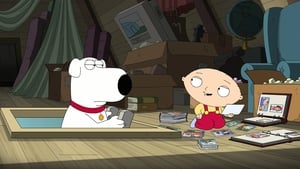